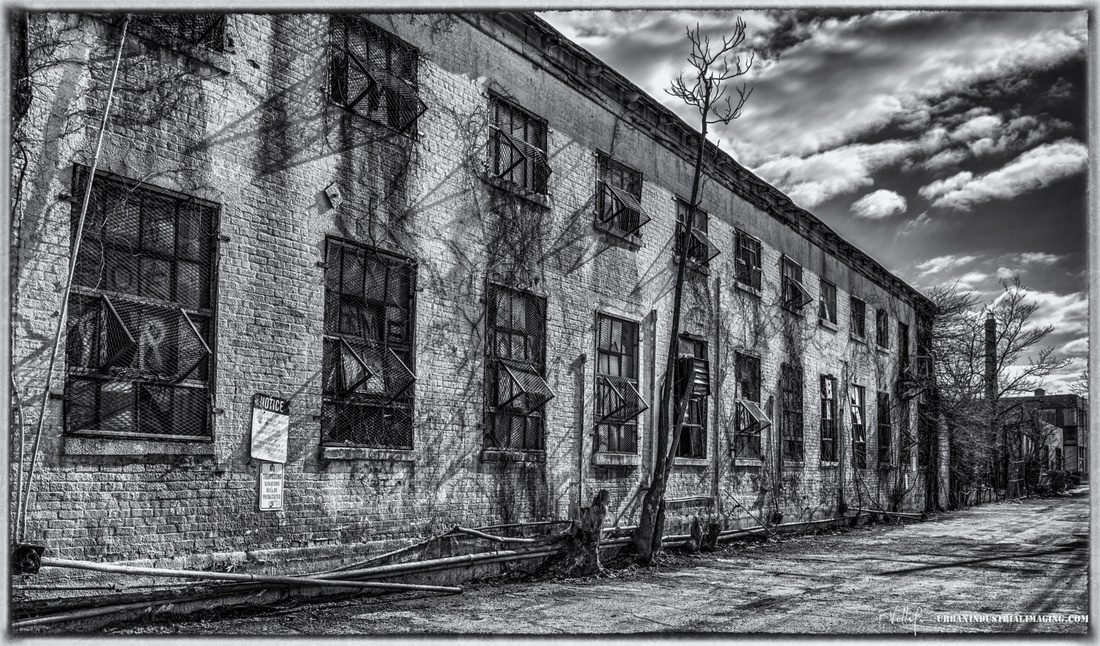 This particular warehouse has been deserted for as long as I've been driving down Elizabeth Avenue.  I've probably passed this specific site at least a dozen times, but today it caught my eye.  Making a mental note to come back, I took this photograph late in the afternoon when the shadows are longer and the sunlight is less harsh.  The graffiti, split pipes, cracked broken windows and notice add to the forlorn nature of this once-thriving business now abandoned.

What is the allure of industrial/urban decay and abandonment?  Maybe it's the reminder that nothing lasts forever - even buildings and cities crumble, fall and die; or it could be the promise of urban renewal - a site soon to be razed and replaced with new development, symbolizing rebirth; or it could be the adrenalin-pumping "edgy" excitement of treading less than favorable thoroughfares.

This area is a zone of industrial debris: grungy, grimy, disheveled and decayed - and not a little perilous.  While taking this image, an individual accosted me as to my need to photograph this building.  While nothing untoward happened, I felt his intent was less than honorable.  I could have been off-base, but my "streetwise" sense said otherwise, so I answered curtly and left.  My fiance was waiting for me in the car and saw the entire scene unfold and thought leaving was in our best interest.

Now I love photographing industrial wastelands, but two things are extremely necessary when embarking on these type of excursions.  First, never travel alone - ALWAYS have a partner and a cell phone available.  Second, ALWAYS be aware of your surroundings: if it looks suspicious, it probably is - LEAVE - some areas are just as dangerous in broad daylight as at night.  No shot, however great, is worth sacrificing your personal safety.