Through A Glass Darkly

Through A Glass, Darkly 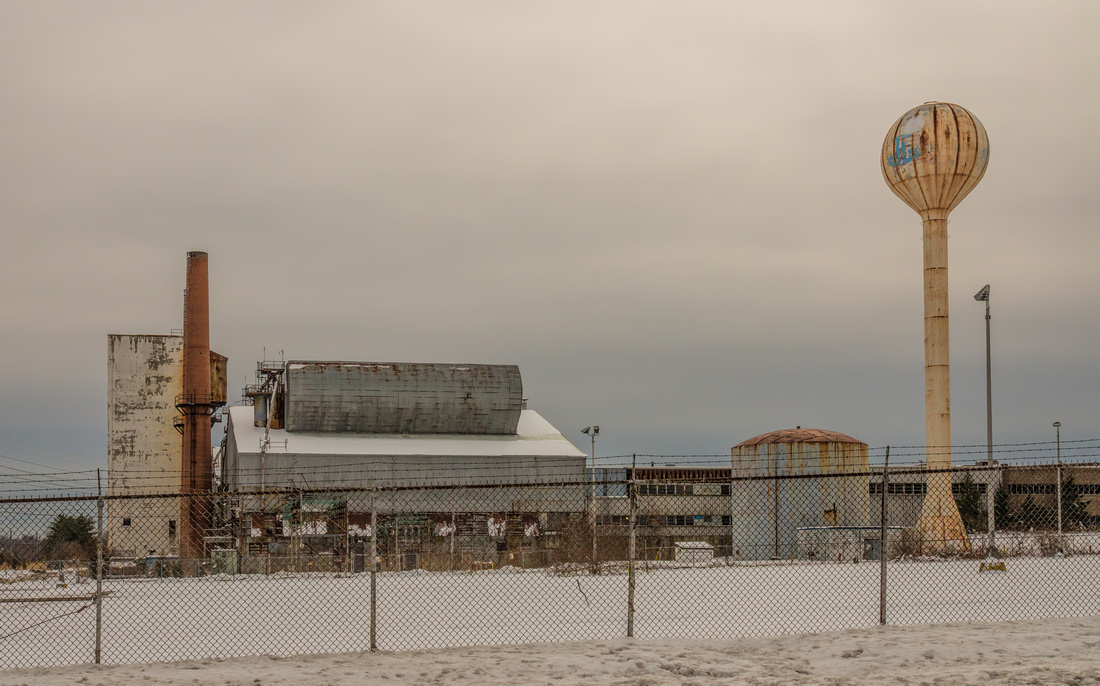 Drive down Cliffwood Avenue towards Aberdeen and look left just past the railroad tracks: there, nestled quietly on a large 52-acre fenced tract is the remnant of a once profitable glassworks, Anchor Glass Container Corporation. Then, a thriving industrial plant employing over 300 local NJ residents, Anchor Glass ran a 24/7 operation producing some 750 million glass bottles annually.  Increasing EPA regulations, improved, cheaper manufacturing methods and a faltering economy caused Anchor Glass to close its doors in 1996.  Since then, abandoned and bereft of any activity, it has sat dark and eerily quiet for almost 20 years.

Plans for redevelopment of the site have been discussed for years, but not until now did any of these plans prove promising: Somerset Development Corporation recently received final approval to begin the redevelopment process.  That said, what was once a familiar sight to area residents for over 50 years will very like be razed.  What is my personal connection with the area?  Relatives of mine worked there as far back as the late 60’s, back when it was still known as Midland Glass (built in 1966), and I would pass the site daily on my way to school back in the 70’s.

What follows are some of the images I was privileged to take of a local legend, and a piece of our rapidly vanishing manufacturing heritage. 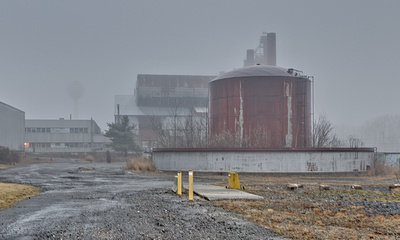 Entering the back of the site on a very overcast morning, I was struck by how strangely quiet it was.  The fog gave an almost surreal quality to the images.

One light was on, but no noise emanated from within the plant. I kept waiting for someone to come out…very unnerving. 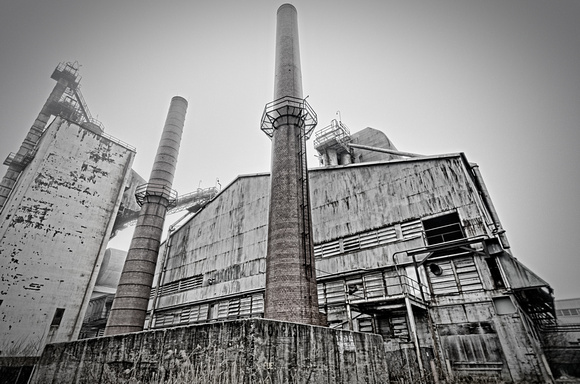 I was unable to enter the interior; nevertheless, there was plenty to see from outside.

I particularly enjoyed viewing this area…the stacks towered over me and I had to use a wide-angle lens to get both stacks completely in the frame.

When I asked the security guard for access to “shoot” the site, she was very pleasant and gave me almost free reign to take as much time as I wanted (within reason). Flush with excitement, I took as many images as I could squeeze into a 1 hour period.  I kept expecting someone to come out and order me off the premises, but that didn’t happen.

Over the last two years, I attempted to contact the property management company for renewed access but was unsuccessful.

Finally, two weeks ago, I was able to gain access for a “very short window”…and I took a few more photographs of the site as it is today, nearly 2 years later – and virtually unchanged (except for more decay, of course).  You can see the more recent images below. 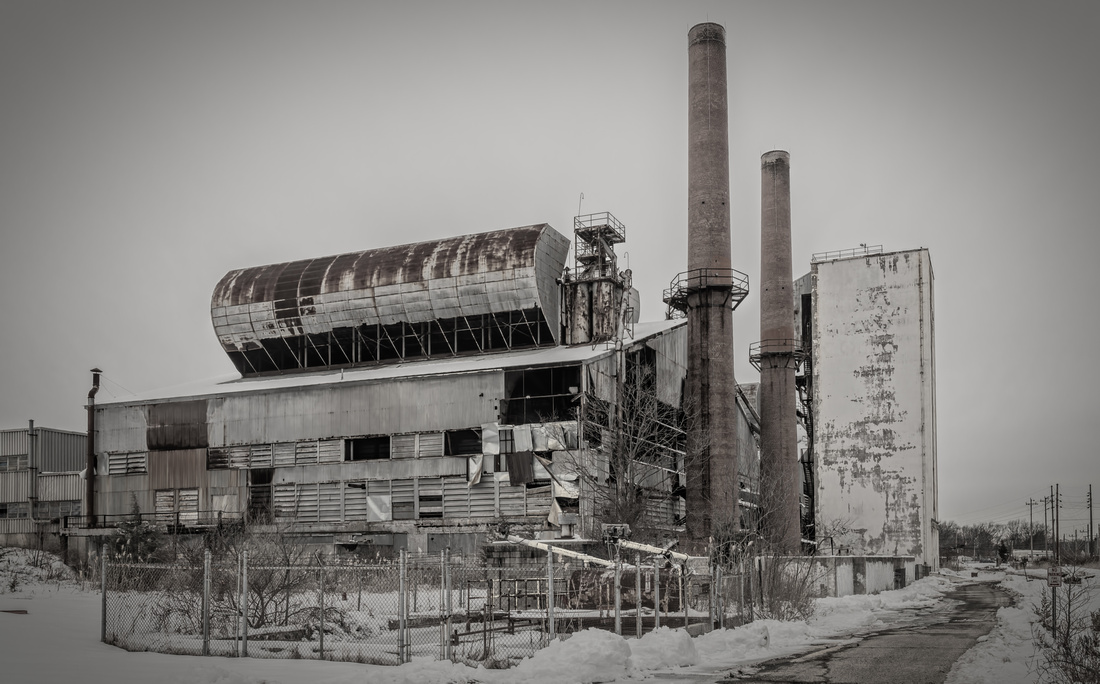 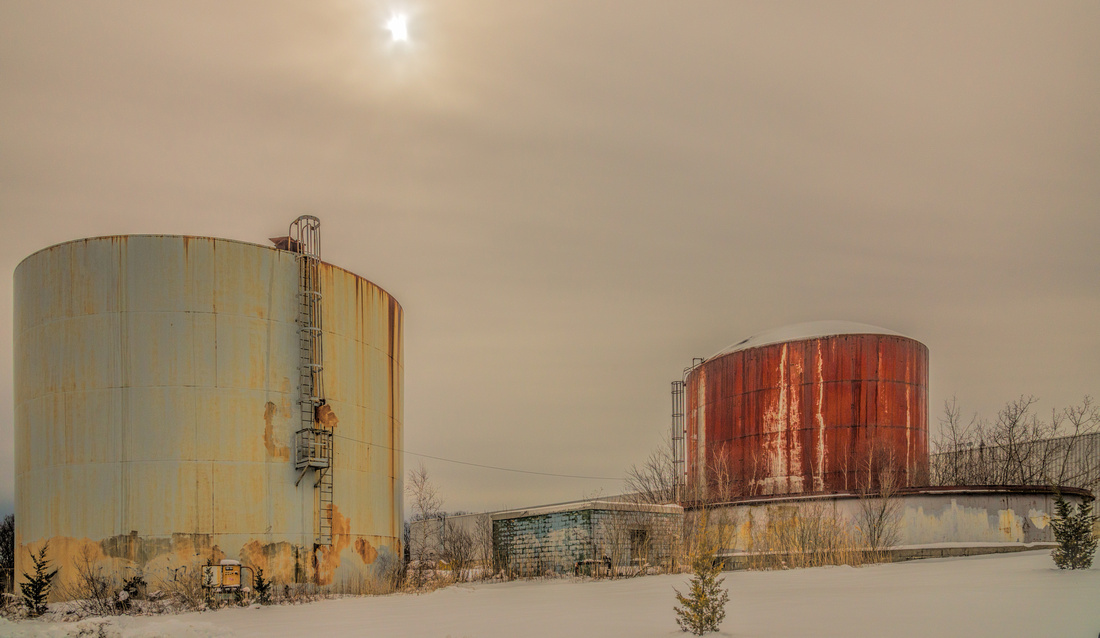 Tanks & Vats in the snow

The images  below were all taken back in 2012.  Obviously, the overcast fog made everything very damp, and the night before it had rained, with a light mist permeating everything that morning.

As I shot frame after frame, I tried to imagine the pride of workmanship that went into Anchor Glass’ products.  I imagined the pallets of bottles rolling off the assembly line, shiny, new and glittering.  And I imagined the smiles of a tired, but happy work crew as they left to go home after another productive day.  Those days are gone…

Sadly, the American landscape is littered with many such cases of industrial decline.  How easy it is to read and forget about the failure of Detroit, or the demise of the giant steel foundries in Bethlehem, PA.  These places are far away, and reside too far in the abstract.  But here is an example in our own back yard with the shuttering of Anchor Glass, it’s former glory now only a distant memory.