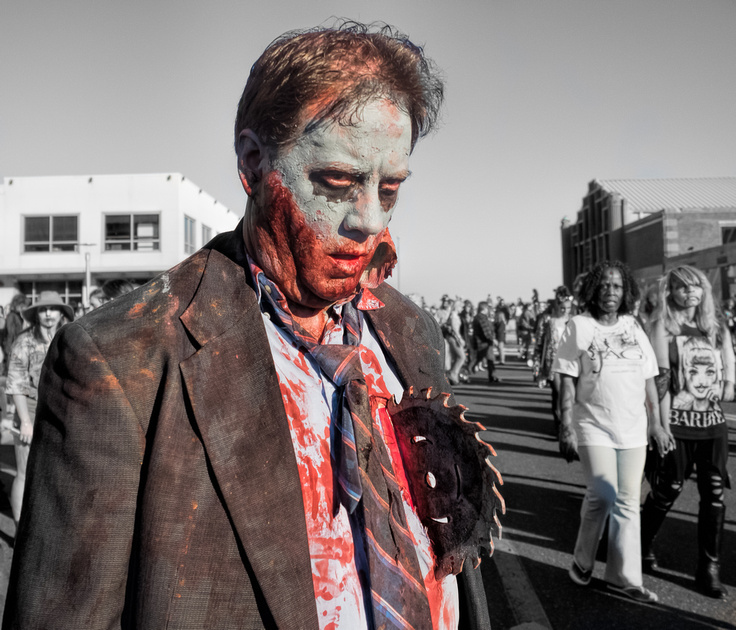 We recently had the opportunity to photograph the annual Zombie Walk in Asbury Park, NJ this past October, 2015.  To fill in our readers, the Zombie Walk is a much-anticipated annual event in Asbury Park on the Jersey Shore.  The event is so popular, that Asbury Park made the world record twice for the most Zombies gathered in one place: in 2010 and again in 2013.  The 2013 Zombie Walk had 9592 zombies in attendance!  While this year's Walk wasn't in as grand a scale as in 2013, nevertheless, it was quite colorful and we were fortunate to capture all the gory details.

For us, this event marked the convergence of several technologies: 1) We used both a DSLR and a mirrorless camera to capture the images; 2) we used a variety of post-processing techniques to provide a polished, unique "look" to our images; and 3) we used a new Adobe product, Slate, to produce a slick presentation, In The Zombie Zone, complete with story line content and embedded images suitable for social media, and all designed on an iPad.

A bit more background: we spend a great deal of time on the Jersey Shore during the weekends.  As a performing musician, I have a Latin Jazz quartet, Frank & 3 To Clave, that performs at a local Cuban Restaurant, CubaCan, every Saturday, and we've been the house band for the last 5 years.  Until recently, we (me and my wife) always missed the Zombie walk due to my performing.  This year, I decided to take off for the event.  Armed with both the Nikon D750 and the Olympus OMD EM5 Mark II, we were able to get some fantastic images of the festivities.  The opening image above was taken by my wife, Rosemarie, with the EM5.

From left to right, above (click the image for a larger view):  Frank & Sally - two zombies out for a stroll; A Zombie rendition of Dr. Seuss' A Cat In The Hat (with Thing 3 and Thing 4); and Freddie & Mrs. Krueger.  Captured with the Nikon D750.

There were quite a few VERY colorful characters:

Many of the participants were extremely serious about their attire and comportment during the event and were frequently "in character", so light banter was not usually possible.  But they were there to be seen and photographed, so gaining permission to do so was extremely easy: usually a nod and an indication of the camera was sufficient.  To maintain proper business ethic, we handed out many business cards with promises to deliver any images upon request (and we have fulfilled that request quite a few times). 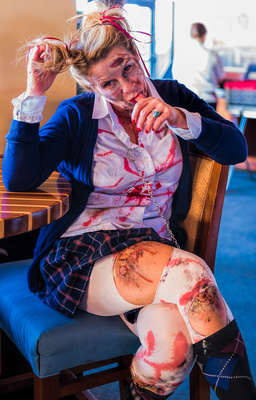 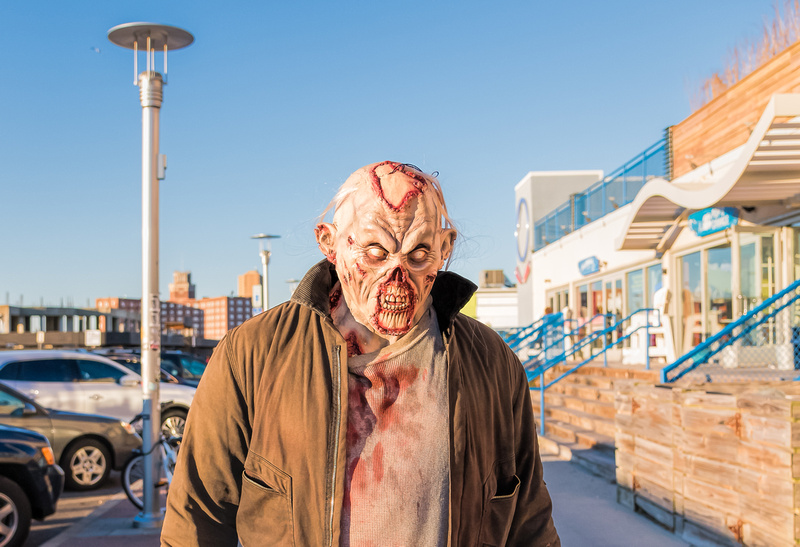 From left to right (click for larger view): a "perky" sorority zombie; a scary zombie out for the evening. Taken with the Nikon D750.

Once the Zombie Walk began, my wife and I positioned ourselves on opposite sides of the street so as to get the best view of the parade as the participants strolled by.  The following images were all taken by my wife with the mirrorless camera (Olympus OMD EM5 Mark II).

From left to right, top to bottom (click for larger view): A business man who had an unfortunate accident; a rather hairy zombie; a real cool ghoul; husband and wife zombies; "The Shining" twins; two "hungry" young girl zombies.

Some notes on post-processing.  We decided to use a "colorized" black-and-white approach for these images.  The  main characters are emphasized in full color, while the remaining image is de-saturated to a simple black-and-white.  This serves to add an '3D' effect to the featured (in color) character(s), and leads the viewers eye directly to the portion of the image to be emphasized.  This is nothing new, but we felt it appropriate for this venue...and it is VERY effective.

The following images were taken by myself on the opposite side of the street with the Nikon D750.

In addition to the "colorized" post-process technique described above, we added a fair amount of clarity and sharpening to further enhance and emphasize the characters...which makes them "jump out" of the image, so to speak.

Finally, some notes on the new Adobe app, Slate.  First of all, it is free.  'Nuff said...free is good.  Second, it works on a computer or a mobile device (i.e. iPad, iPhone, etc.).  Done.  Third, it is optimized for content design as well as delivery.  Not only do you create your "story", replete with media (images and/or video), but you can deliver the content from within the same app.  While it isn't perfect, it is an excellent start and Adobe has kept their promise to deliver more 'smart', mobile-friendly apps.

As already mentioned, we created a story with the Slate app, In the Zombie Zone.  The story concerns a recent adventure with our "Phearless Photographers, Frank & Rosie", and features all of the images in this blog post (and many more additional images not seen here).  Highly recommended.

Some final thoughts.  Events such as these are tailor-made for photographers, and we encourage everyone to take advantage of such opportunities.  With the proliferation of digital cameras (and camera devices), nobody has an excuse NOT to do so.

So get out there and shoot!