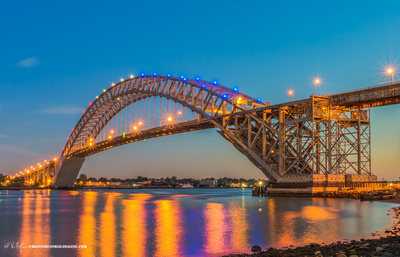 I grew up in the North East; specifically, Bayonne, New Jersey.  At least, I consider Bayonne to be my home.  My father was in the Air Force, so we moved around quite a lot, but we always came back to Bayonne.

As a child, I was completely enamored with the city...skyscrapers, industrial landscapes and huge structures absolutely fascinated me. The North East has a metropolitan flair that is totally unique - there is no other place exactly like it: a megalopolis with a frantic mechanized pace. Even storms here are known as Nor'Easters.

What follows are some of my favorite images from this uniquely uncommon built environment.

I love to shoot bridges and trestles, and this area boasts many world-class structures

Above are: the acclaimed George Washington Bridge (built by the renowned architect Othmar Ammann, who incidentally also designed and built the famed Bayonne Bridge pictured at the beginning of this article); the Newark Ave Bridge & Trestle; the Penn Station Train Trestle; and the world famous Pulaski Skyway.  Since I do a lot of shooting at night, I like to employ one of two techniques in capturing these images - long exposure (as in the case of the GWB, which was a 20 second exposure) or exposure fusion (where I'll take 5 or 7 various exposures and blend them in post).  The B&W images are just B&W conversions of the same.  Most of my post-processing is done in LR5, but I use a number of plug-ins: for perspective correction I use DxO's excellent ViewPoint; for color images - Topaz Clarity and/or Adjust; for B&W either Silver Efex Pro, Topaz BW or onOne's Perfect BW.  I use Topaz Denoise for ALL post-process noise reduction.

One of my more recent series, "On The Passaic", features bridges and scenes from the Passaic River in NJ - except for the GWB, all of the above are from that series.

Scenes from "The Great American City"

But, Urban Industrial Imaging isn't just bridges. There are a great many cities in the North East, and one of my goals is to visit each "Great American City" and preserve its unique character thru digital imaging.  Since I live in NJ, I started with the cities nearest me - New Brunswick, Jersey City, Newark, New York and Philadelphia.

The image top left is downtown New Brunswick, taken from the rooftop of the tallest building in the city, The Vue (courtesy of DEVCO).  That image started it all for me - featured in my first exhibit and sold at auction at George Street Playhouse, landing my first client (DEVCO), and emerging as the signature banner on the City of New Brunswick's website.

The others are (in order): Rockefeller Plaza, taken handheld at night (and is the only POV in this series); Newark On The Passaic; Jersey City waterfront as seen from Liberty State Park; Center City Philadelphia from the rooftop of the Rittenhouse Hotel; and "Golden Metropolis", which is actually Jersey City and Lower Manhattan, taken just after dawn. Yes, one needs to get up early or stay out late to capture images during the Magic or Blue Hour (the hour before sunset/after sunrise or the hour after sunset).  Part of the fun is finding the best vantage points to get the shots...this is where I rely heavily on Google Maps.  Sometimes, my partner will be driving and I'll tell her "Stop!" if I see something, and I'll jump out and get the shot - which is what I did with "Golden Metropolis" above.

Urban Industrial Imaging can also include images of machinery, industrial landscapes, or even urban decay.

Above are: "Night Train Express", Western Maryland relic sitting in the B&O museum in Baltimore, MD; "Australian Spirit", docked at Elizabeth Seaport; "VW Dreams", my tribute to that wonderful automobile (I really miss them); "Monster Bridge", a derelict bridge on Amboy Ave in Elizabeth, NJ; "Rectangles", the NYC jungle from high above; and "Tunnel", the tunnel access from the New Brunswick Train Station to the street.

You can see a great deal more on my website: cityscapes, urban landscape/decay, bridges, trains, cars, ships (and even an aircraft or two).  I just want to thank the Lord for all His opportunities; if not for His providence, I would not be doing what I love.

I will leave you with a few images that have received accolades.  I hope you enjoy viewing them as much as I enjoyed taking them.

NB On The Raritan 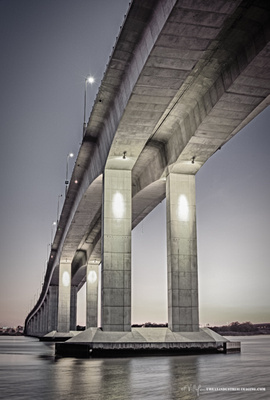 Victory Bridge, Perth Amboy, NJ (nothing, people just like it)

Thank you for reading and viewing my work (don't worry, there is more).  Until next time...