Thank you for your patience while we retrieve your images.

26 photos
Chattanooga...nestled snug in the Tennessee Valley, this is a city that enchants all who have encountered its charms while traveling along the banks of the Tennessee River.

Once a famed railroad town and beacon of The South (known for its much acclaimed "Chattanooga Choo Choo") brimming with industry and river commerce, Chattanooga was often listed as one of the most industrial cities in America. Unfortunately, this led to Chattanooga receiving the dubious distinction of being the "dirtiest city in America" in 1969 by none other than the famed journalist Walter Cronkite.

Ah, but today...Chattanooga is a modern metropolis that has embraced technology to the point it now attracts the likes of giant manufacturers Volkswagen and Komatsu. Enfused with a new objective, Chattanooga draws some of the best and the brightest designers, artists, architects and engineers who now call it home. And for good reason...Chattanooga has been revitalized with a greenway system, numerous parks and the famed RiverWalk - a 13 mile stretch along the Tennessee River that winds thru Chattanooga's historic art district and features walkways, bike paths, parks and vistas, culminating at the Chickamauga Dam.

Chattanooga is a "must-see" stop on anyone's travel itinerary. Great architecture, good schools, an active artist community and fine-dining (and even a few trains along the way) make this city one of Tennessee's crown jewels.
All content © Frank Villafañe & Rose Rios @ UrbanViewPhoto.com 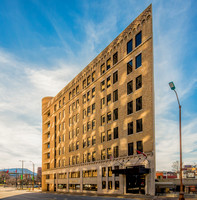 Under The Walnut St Bridge @ Night